Rapinoe, US to face Sweden in Tokyo Olympics soccer opener 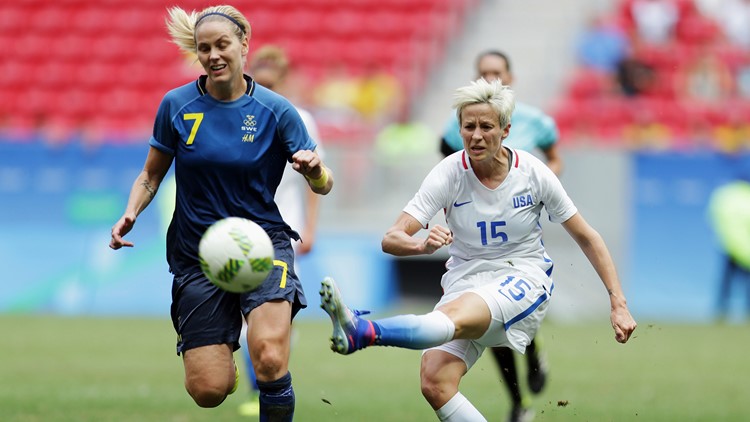 The U.S. opens the Tokyo Games against the team that knocked them out in the quarterfinals at the Rio Olympics in 2016.

ZÜRICH, Switzerland — The United States will open the women’s Olympic soccer tournament on July 21 against Sweden, the team that beat the World Cup champion Americans in the quarterfinals at the 2016 Rio de Janeiro Games.

The two teams were drawn into Group G on Wednesday and will also play Australia and New Zealand at the Tokyo Games. The Oceania neighbors will also play on July 21, two days before the Olympics officially open.

Defending champion Germany did not qualify.

Host nation Japan was put into Group E with 2016 bronze medalist Canada, Britain and Chile. The Netherlands, which reached the 2019 World Cup final, will face Brazil, China and Zambia in Group F.

In the men’s tournament, Olympic champion Brazil will face silver medalist Germany in Group D on July 22, one day before the opening ceremony. The group also includes Ivory Coast and Saudi Arabia.

Japan’s men’s team was drawn into Group A with South Africa, Mexico and France, while Spain will face Argentina, Australia and Egypt in Group C. South Korea will take on New Zealand, Romania and Honduras in Group B.

The men’s tournament is for under-23 players, but teams can select three overage players.

In another note, Athlete protests and political messages will remain banned at the Olympics, the IOC said Wednesday, after a survey found that a majority of competitors were in favor of keeping the ban in place.

The IOC said it surveyed more than 3,500 athletes over the past year and that 70% said it was “not appropriate to demonstrate or express their views” on the field of play or at the opening or closing ceremony. The survey also showed 67% of respondents disapproved of podium demonstrations.

The IOC has not said what consequences athletes may face for protesting, but a “proportionate” range of punishments will be drafted before the games, said Kirsty Coventry, who represents athletes on the IOC executive board.


Travis Pittman contributed to this report.