IPL 2021, PBKS vs MI Match 17 Live Updates: Mumbai, Punjab look to get back among wins 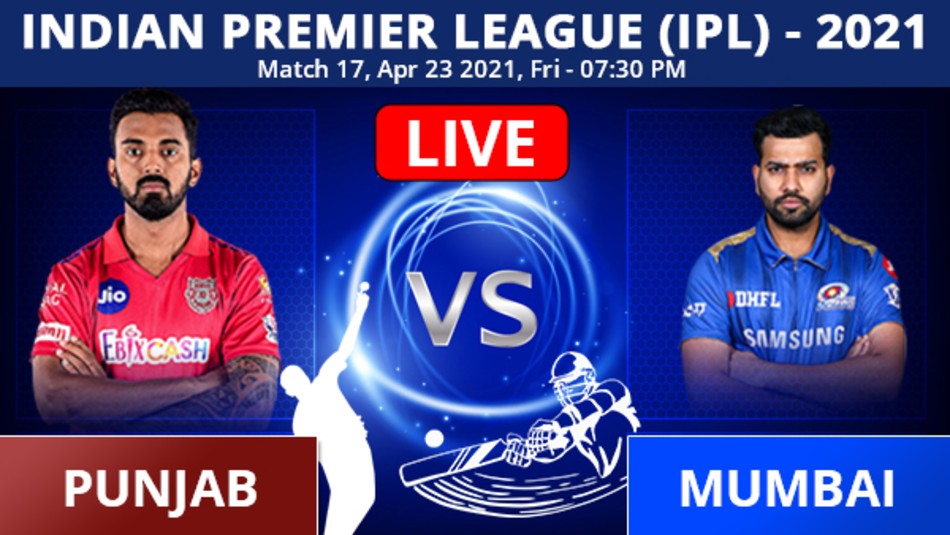 KL Rahul’s PBKS head into the contest on the back of a hattrick of defeats, while Rohit Sharma-led MI come into the contest fresh off a defeat in their recent outing. Both sides will look to get back among the wins.

After winning their IPL 2021 opening game against Rajasthan Royals, PBKS have slumped to three defeats in a row against Delhi Capitals, Chennai Super Kings and Sunrisers Hyderabad. While, they played the first three games in Mumbai, their batting collapsed in the first game in Chennai.

Mumbai Indians, meanwhile, have played all their games in Chennai so far and have lost two of four with wins coming against Kolkata Knight Riders and SRH. Rohit’s side, however, suffered defeats to Royal Challengers Bangalore and DC thanks to a batting failure.

In the head-to-head battle, Mumbai hold the slightest of advantages as they have won 14 of their 26 encounters against Punjab. In last season, both secured a win each and the last time they met the game ended in a super-over with PBKS taking the win.

Punjab have registered two of the lowest scores of this season with 108 vs CSK and 120 vs SRH. But, in both matches while the powerful top order failed to deliver, one man stood firm to at least get them to three figures. And that’s Tamil Nadu batsman Shahrukh Khan. Will we see more fireworks from him today on his home pitch?

Will the big-hitter set the stage on fire when #PBKS take on #MI tonight in Chennai? 🤔 🤔 #VIVOIPL

Rest of the batting flopped, but skipper Rohit played without fear during defeat to Delhi Capitals and is due a big innings. Will he build on his batting knock from the previous match?

Will the @mipaltan skipper go big tonight against #PBKS ❓ #VIVOIPL

While Rahul’s PBKS suffered a batting collapse on Wednesday (April 21), Rohit’s MI also surprisingly suffered similar consequence a day earlier on Tuesday (April 20). So, both teams will look to bat sensibly when they take the field today.

Both Rohit Sharma’s Mumbai Indians and KL Rahul’s Punjab Kings will look to rebound from defeats on yet another possible slow surface.

Hello all and welcome to mykhel’s live score and updates of Match 17 of IPL 2021 in which Punjab Kings clash with Mumbai Indians at the MA Chidambaram Stadium in Chennai.

PNVF optimistic creation of nat'l teams will be easier

IPL 2021: Some Indian players didn’t like restrictions but we felt safe in bubble, says MI’s Pamment