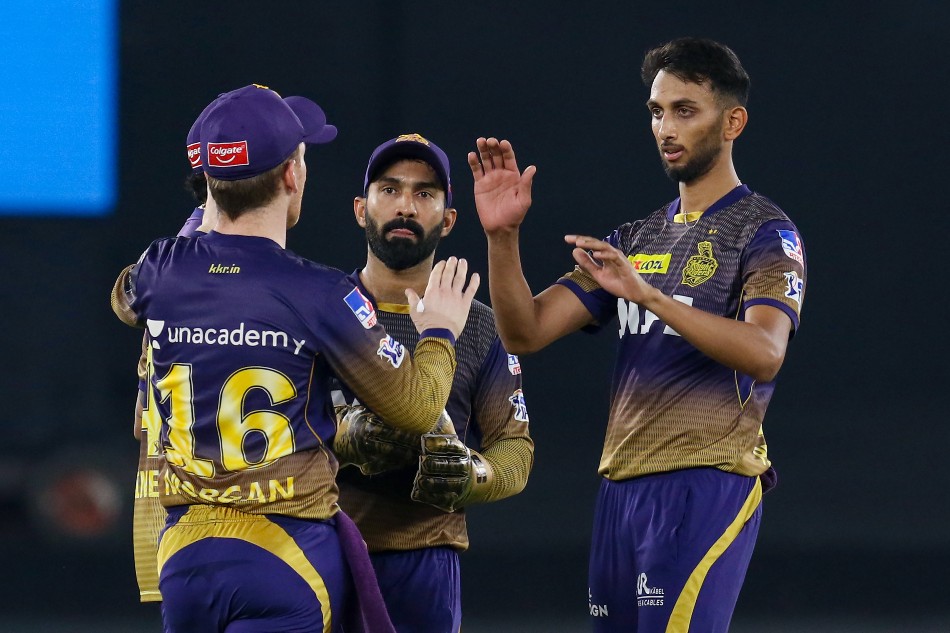 But the Knights got off their Ahmedabad leg of the season on a positive note as they impressed with bat and ball to notch up their second win of the season.

After electing to bowl first, the Knight Riders bowlers were clinical as they restricted Punjab to a paltry total of 123/9.

In reply, though the Knights lost three quick wickets, captain Morgan and Rahul Tripathi stitched together a 66 off 48 ball partnership to guide Kolkata to their second win with 20 balls to spare.

Monday’s (April 26) victory came as a huge relief to the Knight Riders who were languishing at the bottom of the table ahead of the game. The win sees KKR climb to the fifth spot on the table with four points from six matches.

Meanwhile, Punjab is placed sixth, a rung below the Knights with equal points but lower net run rate.

KKR Captain Morgan, who hadn’t been enjoying the season with the bat so far, led from the front on Monday, as he scored an unbeaten 47 off 40 to guide Knight Riders to an important win. The match-winning knock saw the KKR skipper pick up the man-of-the-match award.

Having led from the front and finally notching up a win, KKR skipper Eoin Morgan was a happy man after Monday’s match. Speaking during the post-match presentation ceremony, captain Morgan said, “Nice to lead the team. We’ve worked incredibly hard, but didn’t perform as well as would have like initially. Today our performance was really really impressive – especially our bowlers.”

The win saw KKR climb up to the fifth spot from the bottom of the table. But the KKR skipper was cautious as he said, “Still a lot of time to go in the tournament, we can’t take it for granted.”

After falling to their fourth loss of the season, a dejected KL Rahul was at a loss of words. Speaking about the game at the post-match presentation ceremony, Punjab skipper Rahul said, “I really don’t know what to say, it was a poor performance from us. We should have adapted better on a new pitch. We could have applied a lot more with the bat and get that extra 20-30 runs.

“It was expected that the pitch was difficult to assess at a new venue when you’re batting first, but we should have assessed and adapted quickly and we couldn’t do that. We hope we learn from our mistakes,” said Rahul.

Before signing off Rahul lauded Ravi Bishnoi, who took one of the best catches of the season to dismiss Sunil Narine for a duck. “That was a stunning catch. We’ve been a good fielding side. We have Jonty Rhodes who pushes the boys at every training session. He’s a tough task master and puts everyone to test,” said the Punjab skipper.

Here are the highlights of PBKS vs KKR 2021 post-match presentation:

Ultimate NFL mock draft for 2021: who will your team pick?