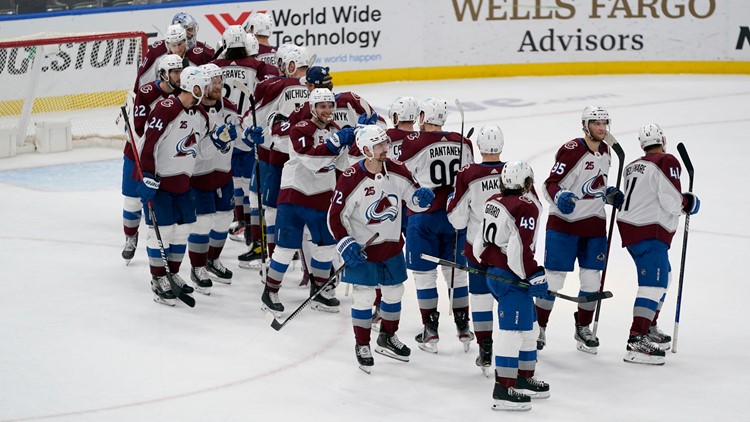 Colorado outscored St. Louis 20-7 in the series and trailed for just 7:12 over the four games.

ST. LOUIS — Philipp Grubauer made 18 saves and Gabriel Landeskog scored the go-ahead goal in the second period as the Colorado Avalanche completed a four-game sweep of the St. Louis Blues with a 5-2 win Sunday in Game 4 of the West Division series.

Vladimir Tarasenko scored twice for St. Louis, which was swept for the first time since losing to the Los Angeles Kings in the second round in 2012.

Saad scored on a shot from the high slot off a pass from Cale Makar just over three minutes earlier. Grubauer got an assist on the play.

Landeskog finished with two goals and six assists in recording a point in every game of the series.

Rantanen whipped a wrist shot past Jordan Binnington with 15:40 left in the third period to push the lead to a 3-1. Rantanen broke in on a 2-on-1 and took a pass from linemate MacKinnon.

Tarasenko converted on a breakaway off a pass from Ryan O’Reilly for a 1-0 lead at 5:07 of the second period. It was Tarasenko’s first goal since April 26. He added a power-play goal with 11:21 left to trim the deficit to 3-2.

MacKinnon and Nichushkin added empty-net goals in the final minute.

Colorado has won nine of the last 10 playoff games against St. Louis, including seven in a row.

The Avalanche scored seven empty-net goals in the series, including two in a 6-3 win in Game 2 and two on Sunday.

Colorado C Nazem Kadri served the second game of an eight-game suspension after hitting Justin Faulk in Game 2. It is the sixth suspension of his career. He is appealing the suspension, with the NHL Players’ Association filing it Sunday night on Kadri’s behalf.

Avalanche: C Alex Newhook left in the first period and did not return after a hit from Steven Santini.

Blues: D Justin Faulk, Robert Bortuzzo, and Vince Dunn did not play. Dunn missed the last 15 games with an upper-body injury. Faulk and Bortuzzo each suffered head injuries in Game 2.

Get out your brooms, because the Colorado @Avalanche just swept the St. Louis Blues!!!#9sports #GoAvsGo pic.twitter.com/2Fje2oEdJP

> Top stories curated daily just for you! Sign up for the 9NEWSLETTER to get can’t-miss stories, Next and Broncos content, weather and more delivered right to your inbox.

> Top stories curated daily just for you! Sign up for the 9NEWSLETTER to get can’t-miss stories, Next and Broncos content, weather, and more delivered right to your inbox.