Son of an 11-year cornerback, Surtain follows Jerry Jeudy as first-round draft picks out of Alabama taken by Broncos in back-to-back years.

ENGLEWOOD, Colo. — Can’t have too many corners, right Vic Fangio?

The Broncos took Alabama cornerback Pat Surtain II with their No. 9 overall draft pick Thursday, disappointing many in Broncos Country who wanted either Justin Fields or Mac Jones, quarterbacks who had been available.

“We like corners, obviously, you never have too many of those in this league, in this day and age,” Fangio, the Broncos’ head coach and defensive play caller. “We ran short last year with a lot of corners through injuries so always happy to pick up a good corner.”

The Broncos played the four games of last season without their top three cornerbacks as A.J. Bouye (suspension), Bryce Callahan (foot injury) and Essang Bassey (ACL) were all down.

And after acquiring veteran quarterback Teddy Bridgewater to back up Drew Lock on Wednesday, Broncos general manager George Paton felt confident enough with his quarterback position to take still another corner. Unless he can shake Aaron Rodgers away from the Green Bay Packers. Rodgers lit up the NFL universe Thursday by letting it known through media channels he wants to be traded. And the Broncos have surfaced as one of his preferred destinations.

Such speculation cooled by night’s end. Sources told 9News the possibility of a Rodgers trade is not dead, although it may be a longshot.

Surtain was drafted first even though the Broncos’ two biggest free-agent acquisitions, Ronald Darby and Kyle Fuller, were both cornerbacks, and the team returns (at least so far) another solid corner in Bryce Callahan. (Fuller and Callahan have their contracts expire after the 2021 season).

“We’ll find a way,” Fangio said when asked how he was going to get Surtain on the field with Fuller, Darby and Callahan. “I’m sure there will be times when we play five DBs, 6 DBs, there will be spots.”

“I’ll benefit a lot learning from those guys, very experienced guys in the NFL,” Surtain said in a Zoom press conference with the Denver media. “Picking their brain and learning from then each and every day.”

The Broncos have now used their first-round draft pick on an Alabama player in back-to-back years. They took Crimson Tide receiver Jerry Jeudy with the No. 15 overall pick last year. Surtain II is the son of former Dolphin and Chiefs’ cornerback Patrick Surtain, who played 11 years in the NFL from 1998-2008.

“I think I can come in Day 1 and make an impact on the team, just from my play style and my play traits,” Surtain said.

By taking Surtain, the Broncos passed up Fields, a dual threat quarterback from Ohio State, Jones, an accurate passer who led Alabama to the national championship.

“Both really good players but we felt Patrick Surtain was the No. 1 player on our board,” Paton said. “So that’s why we took Patrick.”

and a chance to move back in the draft and acquire extra draft picks.

A source told 9News that Philadelphia (No. 12 pick), Chicago (No. 20) and New Orleans (No. 28) were all interested in swapping with the Broncos’ No. 9 pick, but Paton preferred to stay and take his top guy, Surtain.

In an AFC West where opposing quarterbacks Patrick Mahomes II, Justin Herbert and Derek Carr are among the league’s best, Paton decided to build up the defense with hopes of stopping their passing attacks.

“It’s a very stacked defense,” Surtain said. “I can’t wait to compete with those guys. … I think when you look at it when it’s all said and done we’re going to be the No. 1 defense in the NFL.” 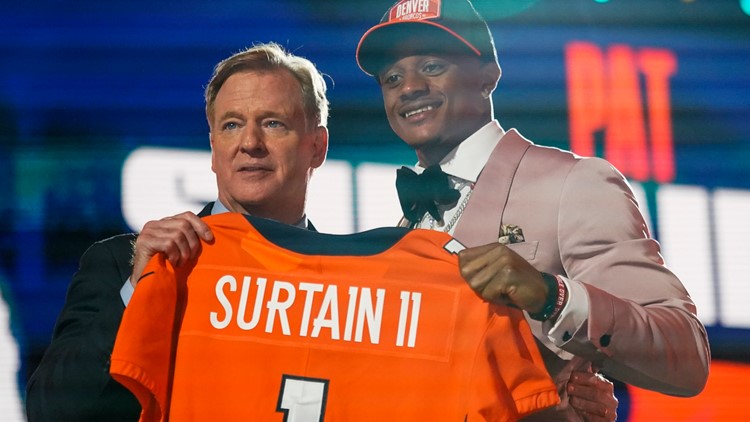 IOC president visit to Tokyo Olympics could be ‘quite tough’