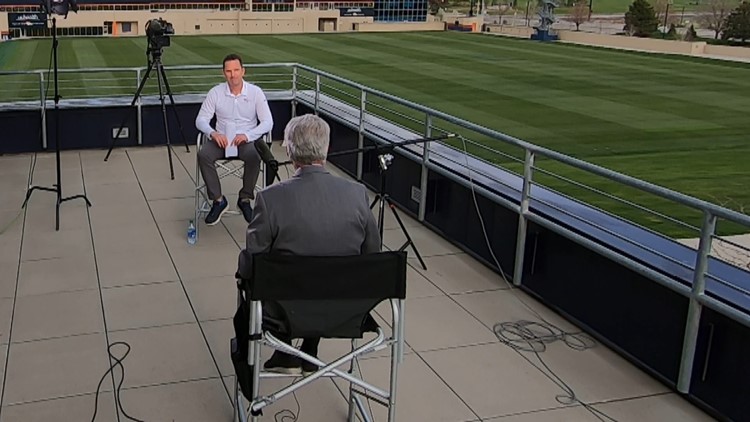 The first-year GM wound up with four defensive backs but no quarterbacks or offensive tackles. Still, an early “B” grade would be fair.

After working every day from before sunrise to after sunset for 3 ½ months with an end goal of improving the 5-11 Broncos team he had inherited, his first roster reconstruction project was pretty much done.

The Aaron Rodgers saga notwithstanding.

The free agent period was near finished and Paton had recently completed a trade for quarterback Teddy Bridgewater, a deal he had been working on intermittingly for weeks, if not months. And now Paton’s seven-round, 10-player draft was finished with his selection of Mississippi State defensive end Marquiss Spencer late in the seventh and final round.

Paton then spent nearly an hour leading the recruitment and agreements with about a dozen undrafted college free agents and had just concluded his post-draft news conference with the large media group in which he graciously thanked just about everyone who collects a check from the Broncos.

He had that relaxed look of mental decompression as he sat in a chair to discuss his draft choices with 9NEWS.

Paton is a scout at heart and he executed his draft as only a scout would by sticking to the player rankings on his draft board, instead of deviating to fill a need like, say, quarterback. The Broncos were already stacked with cornerbacks following their earlier free-agent spending spree on Ronald Darby and Kyle Fuller yet they tripled up at cornerback position by using their No. 9 overall draft pick on Pat Surtain II.

The quarterback position is a much great bigger concern both inside and outside Broncos headquarters yet Paton passed on QB prospects Justin Fields and Mac Jones, who were drafted shortly after, by the Bears at No. 11 and Bill Belichick’s Patriots at No. 15, respectively.

But Paton’s previous NFL experience as a scout, scouting director and assistant general manager had taught him a few things about draft picks that hit, and those that bust.

“You do get in trouble when you reach for need,’’ Paton said in his sit-down interview with 9NEWS. “Because a lot of times in a year or two you’re going to have to replace that player, anyway. Just take the best player who can make your team and produce with your team and will be here for a while. That’s our philosophy. We’re going to try to take the best player within reason.”

The best-player-available philosophy was further amplified later in the draft. The Broncos took not one safety, but two in the fifth round, Caden Sterns of Texas and Indiana’s Jamar Johnson. There was a need for one safety to back up Kareem Jackson, but two? And then with their first pick in the seventh round, the Broncos took another cornerback, Kary Vincent Jr. At least he figures to be a slot corner. Still, one wisecracker said Vic Fangio was about to change his defensive system from the 3-4 to the 3-8.

But when you’re sticking to the board, as they say, and defensive backs are ranked higher than edge rushers or offensive tackles, you take the defensive back.

“Day 3 of the draft, the board kind of talked us into the secondary players that we drafted,’’ Fangio, the Broncos’ head coach and defensive play caller, said in his sit-down chat with 9NEWS. “There was big separation between those four secondary guys when we picked them and what was next. And George’s philosophy, and he stuck to it, which was draft the best players.”

Funny thing about the draft. The first-round pick is overhyped with 3 ½ months of analysis, mock drafts and highly opinionated commentary. The second day gets about three hours of discussion. Even though Day 2 has the all-important second and third-round selections. Or two-thirds of what teams consider “starter” rounds.

Paton immediately began Day 2 by jumping to the No. 3 spot of the second round, No. 35 overall, to take a running back, North Carolina’s Javonte Williams. After quarterback, running back is probably the second-most popular position to football fans. Yet the excitement of a second-round running back was tempered by the non-quarterback pick in the first round. At least outside the Broncos’ war room. Inside, there was feeling of elation when the Broncos jumped the running back-needy Dolphins at No. 36 and got their man.

“Javonte Williams, our national scout Nick Schiralli, who does an outstanding job, he gets to know these players inside and out, this was his favorite player in the draft,’’ Paton said. “Maybe not a top 10 pick but his favorite player just from watching.

“He’s a three-down back. He’s really powerful. He has speed to take it the distance. The thing about him, he’s really hard to tackle. If you watch him, you see they have a hard time tackling him because he’s so physical, he’s built low to the ground. He breaks tons of tackles. He’s elusive in the open field. And he can pass protect. And catch the ball out of the backfield.

“So we feel he’s a three-down back who’s going to add to the room. I’ll keep talking about competition but we wanted more competition in the running back room and with Melvin (Gordon) and Mike Boone and Javonte, I think we have as good a crew as any in the league.”

Paton then traded back twice, way back, and took center Quinn Meinerz — whose self-deprecating ‘The Belly’ reference and lumberjack workout routine made him an instant cult hero – and athletic inside linebacker Baron Browning. Broncos fans have been speaking out about a need for a third-down, and three-down inside linebacker who can cover since Danny Trevathan left for free agency and Brandon Marshall suffered a chronic knee injury after the Super Bowl 50 season of 2015.

The only proper grade to give any team’s draft is an incomplete. No one was excited about Trevathan when the Broncos drafted him in the sixth round of the 2012. And Bronco fans were elated when quarterback Paxton Lynch was their pick with the No. 26 overall selection in the first round of the 2016 draft. Trevathan hit; Lynch did not.

Still, grades are assigned. A “B” grade would be fair for the Broncos for those who want a mark assigned instantly. Surtain and Williams figure to be very good players. There would be no consensus “A” grade, though, not without a quarterback.

How did Paton think he did with the first draft in which he made the final decisions?

“I think we did a nice job bringing in good quality football players, high character,’’ he said. “We did stick to our board. We moved up, we moved down a little bit. The board fell our way sometimes, sometimes it didn’t which is typical in a draft. We feel really good with the players we acquired. I think we improved a lot of positions. I think we’re a better football team. To what extent we’ll have to let it play out.’’

Neymar back for PSG in time for decisive week