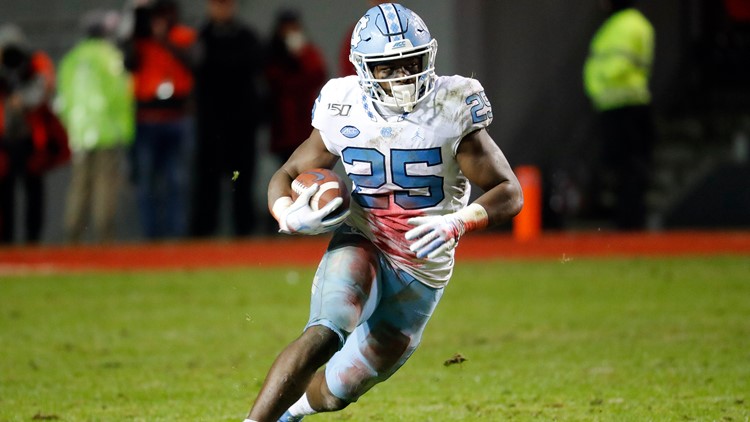 ENGLEWOOD, Colo. — Phillip Lindsay has moved on and as it so happens with all football players, even the hometown heroes, he has been quickly replaced.

The Broncos traded up in the second round of the NFL Draft on Friday to take North Carolina running back Javonte Williams. The Broncos started the round with the No. 40 overall selection. Fearing the Miami Dolphins would take the 220-pound Williams at No. 36, Broncos general manager George Paton worked out a deal with Atlanta GM Terry Fontenot to move up to the No. 35 spot. In return, the Broncos surrendered their fourth-round pick (No. 114 overall) and got back a sixth-round selection (No. 219) from Atlanta.

“I didn’t expect the Broncos to be the team that I went to,” Williams said in a Zoom press conference with the Denver media. “Throughout the process that wasn’t a team I talked to a lot. But I remember coach (Curtis) Modkins at my Pro Day and it’s just a blessing to be here and I’m ready to get to Denver and ready to start.”

In essence, the Broncos gave up the equivalent of a fifth-round pick to move up five spots to get their new running back complement to starter Melvin Gordon III. The Broncos have a third-round draft pick coming later Friday.

Gordon, 28, overcame a slow start last season to finish with 986 rushing yards and 9 touchdowns. He will draw $7 million in 2021, the final season of a two-year, $16 million contract. Lindsay, a popular undrafted underdog from the University of Colorado and Denver South High School, rushed for back-to-back, 1,000-yard seasons for the Broncos in 2018 and 2019 but fell off last year to 503 yards as he struggled through injuries and reduced playing time from the addition of Gordon.

Lindsay was granted his release in March and signed a one-year deal with the Houston Texans.

Gordon’s new 1B back is Williams, who rushed for 19 touchdowns and 1,140 yards on 7.3 yards a carry in 11 games for the Tar Heels as a junior last season. He also had 25 catches for 305 yards and three touchdowns. With the Broncos signing No. 3 running back Mike Boone to a two-year contract in March, the roster status of fourth-year running back Royce Freeman, a rookie starter in 2018 but a No. 3 back last year, is uncertain.

RELATED: Preview of Broncos’ 2nd and 3rd round draft picks

Gautam Gambhir picks his next ‘superstar’ ahead of IPL 2021 auctions, Sports News