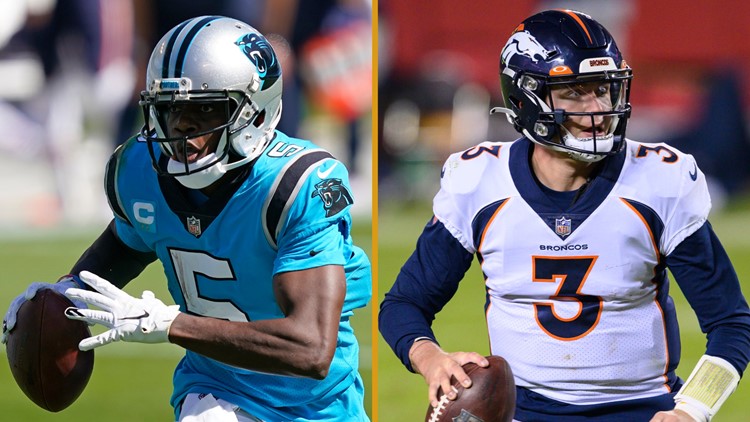 After passing on Fields and Jones in the draft, and Rodgers still a Packer, the Broncos will conduct a true QB competition before the 2021 season begins.

ENGLEWOOD, Colo. — They can explain the merits of Patrick Surtain II, Javonte Williams and the rest of their draft class all they want.

It would only be an interruption to the primary topic of conversation. Broncos first-year general manager George Paton and returning head coach Vic Fangio know what 95% of the virtual office talk will be about come Monday morning.

“I do,’’ Paton said with a smile in his sit-down interview Saturday evening with 9News.

So when are the Broncos going to trade for Aaron Rodgers?

“Who?’’ Fangio said with his smile in his 9News question-and-answer session. “Next question.”

The great quarterback that is Aaron Rodgers wants to be traded, and the Denver Broncos reportedly are among his preferred destinations. The problem is, and it’s a big one, the Green Bay Packers insist they won’t trade Rodgers.

RELATED: A look back at the fleeting but beautiful moments when Broncos Twitter thought Aaron Rodgers was coming to Denver

Without Rodgers, the Broncos’ quarterback situation doesn’t excite the masses. In an AFC West that features the QB likes of Patrick Mahomes II – who is so fantastic, he is the only NFL passer considered a notch better than Rodgers – rookie of the year Justin Herbert and consistently above-average Derek Carr, the Broncos will counter with Drew Lock and Teddy Bridgewater.

There is something to be said for each. Lock is young, mobile and has a strong arm. Bridgewater is poised, accurate and is a natural leader. Yet, together, Lock and Bridgewater would still give the Broncos the fourth-best quarterback ranking in the four-team AFC West.

So who will it be? Lock is the incumbent. Turnover-prone as he was last season, he did have his career-best game while outplaying Bridgewater at Carolina in mid-December. But make no mistake, the starting job will not be given to Lock. He will have to legitimately beat out Bridgewater to keep it. Will Lock at least get the first set of reps in OTAs (organized team activities), training camp and the preseason?

“We’ll work that out,’’ Fangio said. “We haven’t sat down and figured that out. But it will be something that at the end of the day, maybe not at the end of every day, but over the course of OTAs and training camp, it’ll be 50-50.”

Paton could have added another highly regarded quarterback not named Aaron Rodgers to the competition. As the Broncos were getting ready to make a selection with their No. 9 overall draft pick, Ohio State’s dual-threat talent Justin Fields and Alabama’s accurate-throwing, quick processing Mac Jones were available. Instead, Paton picked the cornerback Surtain, even though the Broncos had just spent $19.5 million in 2021 payroll on cornerbacks Ronald Darby and Kyle Fuller through free agency.

There was significant discussion about taking Fields in the days leading up to the draft – the Broncos may have put in more scouting work on him than any other player – but he went No. 11 to the Chicago Bears. Jones went No. 15 to New England. So it’s not like Fields or Jones weren’t worthy.

To have brought in Fields or Jones, though, would have meant definitively giving up on Lock. There was some thought that Lock with two years and 19 starts of NFL experience before his 25th birthday would be well ahead of both Fields and Jones with zero NFL experience, at least for this 2021 season.

“I think Drew’s had a helluva offseason up to this point, albeit we haven’t been on the field,’’ Fangio said. “But you can get better this time of year, February, March and April, studying yourself on cut-up tape. Getting retaught all the little things without having the stress of playing a game.

“I think Drew is going to look good here in the offseason when we do hit the field. And I’ve been an admirer of Teddy Bridgewater for many years. I coached against him when he was in Minnesota prior to his (knee) injury. Saw him last year when we played so prepared for him for a week. He’s a good football player. A good quarterback. He’s got deceptive scramble ability. He’s got really good pocket feel. He’s got great leadership abilities. I think he’s an accurate passer and processes very well so we’re happy.’’

It hasn’t all been sunshine and bouquets for Lock this offseason. There are no secrets in the NFL and two weeks after the 2020 regular season concluded came notice Paton would be trying to upgrade his new team’s quarterback position. Paton’s predecessor, John Elway, had a little more invested in Lock. It was Elway who drafted him two years ago.

But Lock finished 32nd in the quarterback rankings last year and Paton made a play for Detroit’s Matthew Stafford, who went to the Rams instead. There was talk of the Broncos having a chance at acquiring Houston’s Deshaun Watson, who was disenchanted with team’s management before that became the least of his problems. There were extended Bridgewater trade talks before the deal was consummated on the eve of the draft.

RELATED: Paton on adding QB: ‘We want competition and I’ve said that since I’ve gotten here and that hasn’t changed’

And then Rodgers’ desire to leave Green Bay reverberated through the Rocky Mountains on Thursday afternoon, a couple hours before the draft was to begin.

“Obviously, we heard the news,’’ Paton said. “But we were focused on the draft.”

Lock’s focus and confidence as the rest of his team gathers for OTAs next month – and Fangio is under the impression the majority of his veteran players will show up after the Phase I conditioning period expires in two weeks – will be worth monitoring. Will Lock be able to take charge when his teammates know he was nearly a lame duck many times over this offseason and he still might be if he can’t beat out Bridgewater?

“I think he’s very tough mentally,’’ Paton said of Lock. “I’ve had a number of conversations with Drew. I talked to Drew before we traded for Teddy. He embraces it. I told him the first day I met him we’re going to bring in competition and he’s all for it. He’s a competitor. He’s working his butt off.”