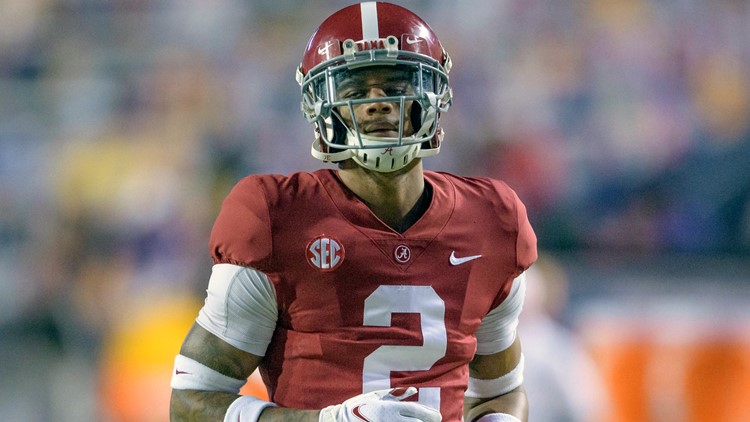 Broncos’ first-round draft pick has the bloodlines, measurables and talent to become a star cornerback.

ENGLEWOOD, Colo. — Dad sat alone in a fold-down chair, his first solitary moment since he arrived. He was waiting for his wife and the next Broncos’ staffer to escort them wherever it was they were supposed to go next.

A minute or so later, Michelle Surtain walked around the corner, alone, if only for a moment, across the artificial, dark green grass of the Pat Bowlen Fieldhouse.

It had been a 24-hour whirlwind for the Surtain family. Eldest child but still young son Pat Surtain II was in Cleveland, accompanied by his parents, waiting to hear his name called in the NFL Draft. The expectation was his selection would come sooner rather than later, and the Broncos delivered by ignoring their fan base’s desire for a quarterback and using their No. 9 overall draft pick to select the tall, fast cornerback from mighty Alabama who on Thursday night was donned in a light pink suit and black bow tie.

Immediately after Surtain’s name was called by commissioner Roger Goodell as the Broncos’ first-round pick, it was time to retell the often-told story of how the young man who had just turned 21 years old a couple of weeks earlier was destined for NFL glory since the crib. His dad, Patrick Surtain, had played the same cornerback position for 11 professional seasons, seven with the Miami Dolphins and then four more with the Kansas City Chiefs.

A private plane leased by the Broncos touched down about noon in Denver, and this time while wearing a plaid, gray suit, Pat Surtain and his parents were whisked off for a 2 p.m. introductory news conference at his new team’s indoor practice facility. After the presser, Surtain broke off to do several one-on-one sessions. Near the end of the line came his sit down with 9News.

Naturally, 9News pivoted off the common narrative. Anybody ask about mom, yet?

“He’s absolutely a mama’s boy,’’ said papa Patrick. “She’s been the rock of our family. Even when I was in the league, she was everything. A wife. A mom. She’s been there for the kids. Take me out of the picture, man, it’s her. She’s the one that makes the family go. Like you say, he’s definitely a mama’s boy.’’

Patrick the dad not only was a very good NFL cornerback for a long time – earning first-team All Pro in 2002 and three Pro Bowls while compiling 21 interceptions in the four-season stretch from 2002-05 – he was head coach for his son’s American Heritage School football team, an academic and athletic juggernaut near Fort Lauderdale that is along the lines of Valor Christian High School here.

Does it bother mom to be ever-present, but largely ignored as the media and football fans swarm around her son and husband?

“Never,’’ said Michelle Surtain. “Never get tired of it, it never gets old. It’s natural. It’s a natural thing. His dad played. It’s rewarding. I think it’s even more special to see Pat II go through the whole process. It’s amazing. It’s rewarding as a mom.”

Parents are the greatest of influences on young men. For those who become athletically inclined, coaches are right there as prominent mentors, too. In high school, Pat Surtain II had both in one man. His dad was his coach. When the younger Surtain left the nest for Alabama, he had three years under the most successful football coach in college history, Nick Saban. The Crimson Tide went 38-3 in Surtain II’s three years, played in two national championship games and won it all with a 13-0 record in 2020.

Saban, through his sideline demeanor, does not look like he would be easy to play for. Surtain smiled at this assertion, but then respectfully contradicted.

“It was tremendous playing for coach Saban,’’ he said. “Just learning from an all-time great coach each and every day helped shaped me to become the best that I am today. Getting input from him, learning some tips from him, I think it helped a lot and shaped me for the next level.”

Surtain II is best appreciated not through stats but through two kinds of tape – the type that measures height and arm length and the other that shows his play through a video screen. He is 6-foot-2 with a slender, but not skinny 208-pound build, and long arms. He ran a 4.47-second 40 at Alabama’s first Pro Day. For a player that tall, that’s scooting.

“When you turn on the tape, that’s what a corner should look like,’’ said Broncos general manager George Paton, who has been on the same team with dad (in Miami) and son. “They shouldn’t move like he does. He’s long, he’s athletic. … When you watch Patrick, you can get bored because they never throw to him. He only had 48 targets this year. They only completed 21 passes. You love the movement. For a guy this big, he is always in phase. He’s hard to throw at for quarterbacks.’’

The young Surtain had just four interceptions, half of which came in his sophomore year when he played the slot in nickel situations, in 41 games at Alabama. He got his first start in Game 3 of his freshman year and was on the field for the first snap every game thereafter. The inside position could become invaluable experience because the Broncos had already invested $10 million in 2021 payroll in free agent cornerback Ronald Darby in March and another $9.5 million in another free-agent corner, Kyle Fuller.

“Yeah, I can play inside for sure,’’ the young Surtain said. “I played the inside position my sophomore year, the nickel position. I’m a very versatile player as well. Whatever they need me at I think I can fit well.’’

Not that he will. Surtain will surpass the payouts of Darby and Fuller as the rookie is scheduled to draw a $12.6 million signing bonus as part of his four-year, $21 million contract. He will become the No. 1 corner in Vic Fangio’s defensive system, if not immediately.

Young Pat Surtain doesn’t seem to crave the spotlight as he moves from one media appointment to another, but it’s obvious he’s accustomed to it. He was about to turn 9 when his dad played his last game, old enough to witness the regular occurrence of strangers asking his father for his autograph while engaging in small talk about the game and his team.

“It was a tremendous feeling, being able to experience that in his playing days,’’ young Surtain said. “Going back when he was playing for the Dolphins and the Chiefs, it was a lifetime moment for me and my family watching him play. I remember my earliest memories watching him make plays, pick sixes, all that. Those moments were some of my fondest memories.”

No one who just turned 21 two weeks earlier thinks about where their life will be 20 years from now. And they certainly don’t think about on their first day as an NFL player while wearing a plaid gray suit and answering questions from unfamiliar media members. Still, Surtain’s parents didn’t just raise a fine football player. They instilled principles that should remain long after his playing days are finished.

“I’ve been telling him since Day 1, always be yourself,’’ papa Patrick said. “Don’t be a guy that follows the in-crowd. Move at your pace and don’t let anybody change that. Speak up for yourself. If you have a problem, alert somebody about it. Don’t hold it in. Speak your mind and always be yourself.”

Mom echoed the importance of humility and being true to yourself. But moms being moms, Michelle Surtain added one more basic truth for her son to hold close.

“Family,’’ she said. “Family is everything. Especially what we all went through last year with the pandemic. It opened everyone’s eyes. Just enjoy family.’’

Mau excused from tryouts, but has citizenship issues, PNVF says