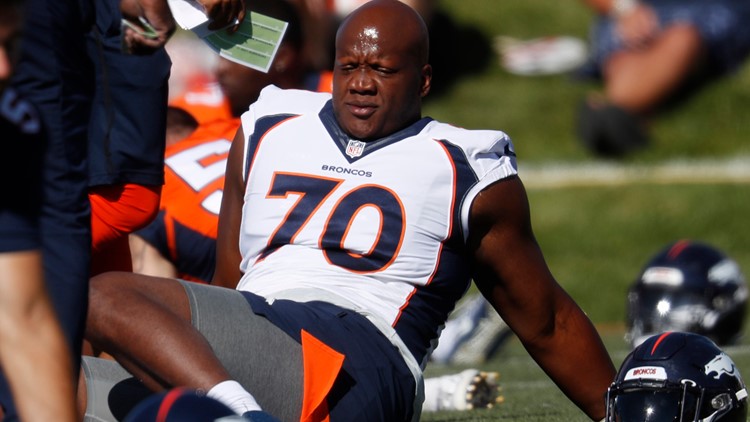 Injury suffered away from team headquarters could cost him at least $10 million in 2021 compensation.

DENVER — As it turned out, Ja’Wuan James practically never was the Denver Broncos’ right tackle.

After signing a four-year, $51 million contract in March 2019 that made him the NFL’s highest-paid right tackle, James played in just three games for the Broncos that season and didn’t make it to the second half in any of them because of a knee injury — even though team officials said he was medically cleared to play.

James then opted out of the 2020 season because of COVID-19 fears.

And now James’ third season is finished before it started after he suffered a torn Achilles injury Tuesday while working out in the Denver-area away from the team facility. James had been working out at Broncos’ headquarters until he honored the NFL players’ union wishes to stay away during the offseason.

NFL officials responded by stating that any player who suffers an injury while working out away from the team facility this offseason would not be financially or covered. James drew $17 million in 2019, had his $10 million payout for 2020 tolled by his opt-out, and it now appears there’s a good chance he may not receive that $10 million because he suffered the injury away from team headquarters. After that, the final two years and $24 million on James’ deal were not guaranteed at signing.

With James down, the Broncos’ current right tackle would be Calvin Anderson, who played in 16 games last year and started twice. Behind Anderson is Quinn Bailey, who was undrafted out of Arizona State in 2019 and spent most of the past two years on the Broncos’ practice squad. Garett Bolles is the Broncos’ starting left tackle for going on his fifth year.

The Broncos did not draft an offensive tackle over the weekend, but did sign undrafted Illinois State prospect Drew Himmelman to a deal that includes a relatively hefty $25,000 signing bonus and $125,000 in salary guarantees. Himmelman is 6-foot-9 and 320 pounds.

Don’t be surprised if Broncos general manager George Paton also signs a veteran offensive tackle between now and the start of the season.

RELATED: Paton explains Broncos draft: ‘You do get in trouble when you reach for need’

RELATED: Broncos 2021 offseason: After trying to keep up with Chiefs’ offense last year, strategy flipped to trying to stop them

> Top stories are curated daily just for you! Sign up for the 9NEWSLETTER to get can’t-miss stories, Next and Denver Broncos content, weather and more delivered right to your inbox.

For both Apple TV and Fire TV, search for KUSA “9news” to find the free app to add it to your account. Another option for Fire TV is to have the app delivered directly to your Fire TV through Amazon.

Nonoy declares loyalty to Ayo as reason for leaving Tigers